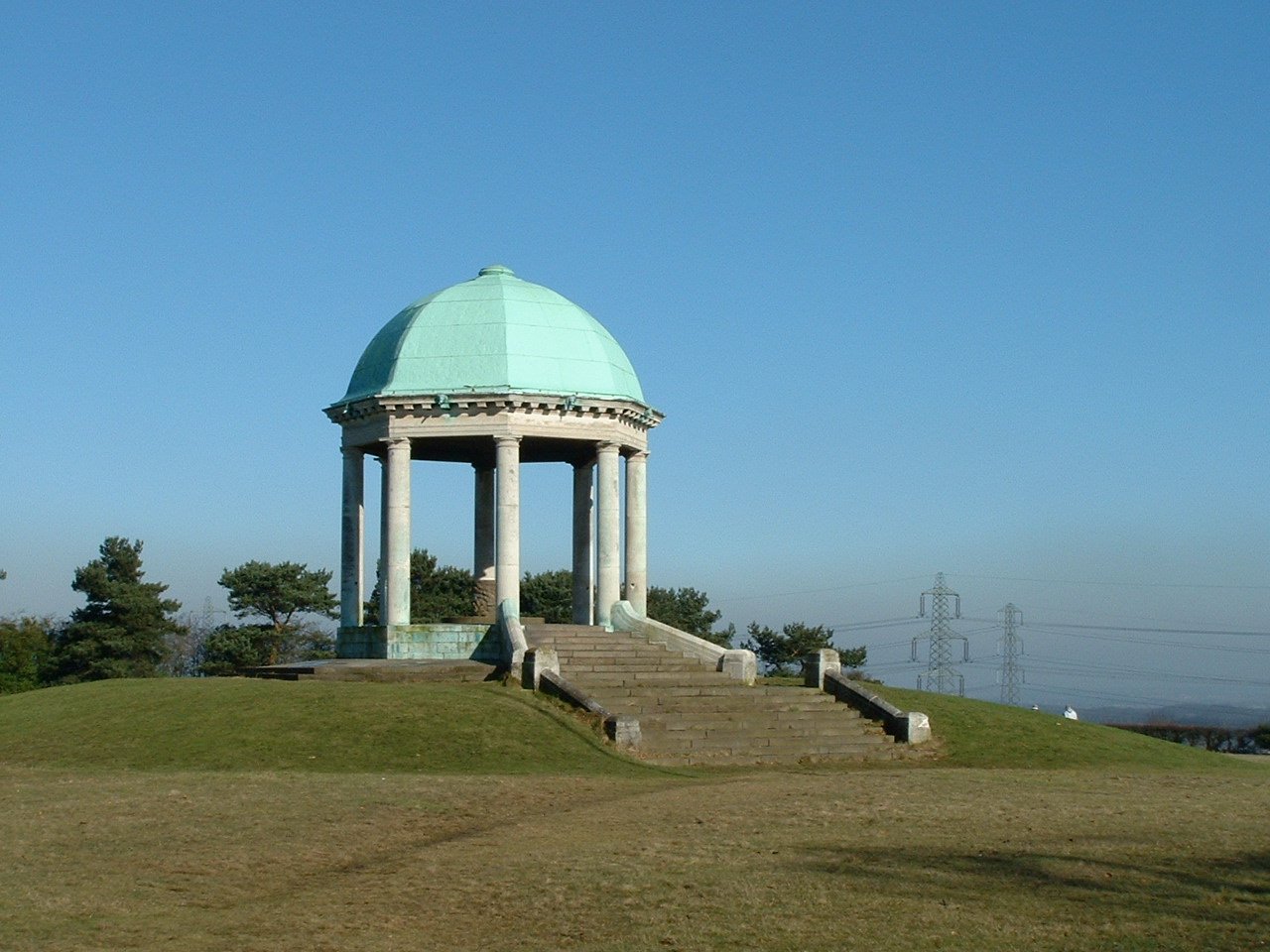 With its summit overlooking the surrounding, low-lying land, it is a natural focal point and has been so over the millennia.  Oral tradition has it that from its top can be seen 15 counties – surely on what must be a very special day – and also that, if one travels due east from its 744feet/ 227metre crown, no higher ground is encountered until the Ural Mountains in Russia are reached.

Over the years it has been a venue for the celebration of national events, a point of nationwide communication, a rallying point the militia and as a public amenity for people to enjoy the commanding views of distant landmarks.

The name Barr Beacon was first referred to as such in documents of the 17th century, although the name Barr is almost certainly derived from the Celtic “barra”, meaning summit.  Early antiquarians thought this to be a centre for Druidic ceremonies, a belief no longer held.  As a beacon there a possibility that one was fired there as a warning of the approach of the Spanish Armada.  Until 1799 the land lying to the east was rough common land, and earlier, tree-covered as part of the Royal Forest of Cannock Chase.  The summit was probably early-on cleared of trees making it well suited as a site for a beacon.  When arms were granted to Thomas Scott of Great Barr before 1663, the crest was a black beacon flaming, with a red ladder.  This was later adopted by Aldridge Urban District Council as its unofficial badge.

The firing of a beacon was prepared in the Napoleonic period when the summit was equipped with poles, iron basket and chains ready to announce the landing of French troops and on 28 September 1799 the Colours were presented here to the Walsall Volunteers on their foundation.  This was an early form of Territorial Army unit raised to counter the threat of invasion.  Then in 1800 a detachment of Royal Engineers occupied the summit for a month while taking bearings of other high points in preparation for the Government Ordnance Survey.

Queen Victoria’s Golden Jubilee in 1887 was celebrated in great style with must have been the largest bonfire to have been seen there.  With a base of 24 feet square and 30 feet high, it was built of cordwood, tarred boat wood, oil and tar casks with 216 gallons of oil to assist conflagration, it must have been quite a spectacle. The signal to put a torch to the pile was awaited from the Lickey Hills, which, when received at about 10pm, was acknowledged by the firing of twelve rockets.  This greeting was passed to on to the Wrekin and through the Lake District to Scotland.

Several other events of national rejoicing were marked in similar manner.  On the celebration for Queen Elizabeth’s Silver Jubilee in 1977 the starting signal was taken from Sedgley Beacon about nine miles away.  There was talk three years ago of a bonfire to usher in the Third Millennium, but that was all that it was.

With the development of a public water supply, in 1897 the South Staffordshire Water Company was granted permission to construct a storage reservoir which is enclosed and does not obtrude on the visual effect of the summit.  In recent years capacity has been increased by the addition of another reservoir alongside.

The grove of deciduous trees, which graced the summit and were tall and whose canopies interwove to form an umbrella-like top making it easy to pick out Barr Beacon from a distance, is now much reduced, just two of the original trees remaining, the others having suffered the ravages of atmospheric pollution.  Within the iron railed enclosure other trees are establishing, notably pine trees, which thrive on the poor sandy soil. Although not as noble as the tall beeches they replace, the group of trees which have so long been a feature of the summit will be maintained.

In 1919, Col. J.H.Wilkinson JP, the owner of land hereabout, gifted the summit with 150 acres of surrounding land to the councils of Birmingham, Walsall and Sutton Coldfield for the use of the public in perpetuity and as a memorial to those local servicemen who lost their lives in the First World War.  Dedication was finalised with the completion in 1933 of a beautiful monument in Portland stone and in the form of a Grecian tholos.  This housed a topograph, a circular bronze map marked compass-wise with distant landmarks to assist visitors get their bearings.  This was removed at the outbreak of the Second World War as a security measure to a building in Cannon Hill Park, Birmingham but, unfortunately, the building and its contents were destroyed by a bomb. Other topographs have come and gone the result of vandalism.  Today’s tholos is something of a shadow of its pre-war glory.  Bronze railings and decorative chainwork have been removed and earth has been banked up over the lower terrace in an effort to lessen the depredations of the vandal.

However, the location is still attractive with extended open space, a second parking area and paths reaching as far as Beacon Hill.